Mistress Kristina is a beautiful babe from Italy, but watch out! This mistress doesn’t fuck around and thoroughly enjoys tying her men up and treating them like pure trash. Poor Steve had no idea what he was in for!

After she gets Steve in her living room, Kristina begins to take charge. Dressed in a tight black shirt, black thong and vinyl black boots, Kristina ties Steve up, and no matter how hard he struggles, he cannot escape. You can see the panic in Steve’s face grow as Kristina has her way with him.

Kristina performs all sorts of wrestling moves on Steve, practically making him suffocate, and rubs her bare ass in his face as well.

Get the Clip at the Dangerous Girls YooGirls Store 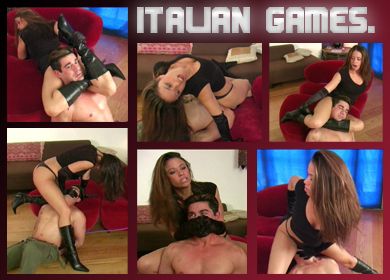